“Your wife has metastatic cancer of the liver. With or without chemotherapy, she has only a few weeks to live. We can treat her, but it will only slightly prolong her life.” These were the words spoken to John Osteen by the hospital medical consultant on 10th December 1981. John’s wife, Dodie, had checked into St Luke’s Hospital in Houston, Texas, for what she felt would be some routine tests. Instead, she was informed of the diagnosis of cancer. But worse, it was of a type that was classified medically as being incurable. Mrs Osteen was sent home to die.

John was a Christian pastor, who, along with Dodie, founded the Lakewood Church in Houston, Texas. Although very shocked by this news, their natural inclination was to turn to their faith in God and believe Him for a miracle. The following day, on December 11, John anointed his wife with oil, and in prayer, took authority over any disease or cancerous cells in her body. 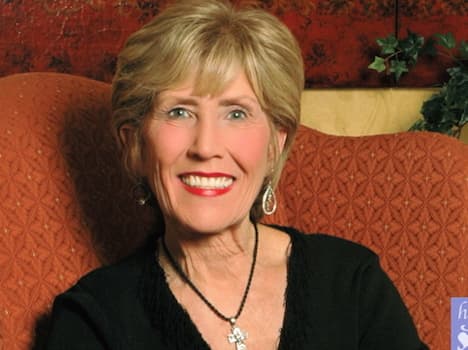 So, did the cancer immediately disappear? No, it didn’t! Many symptoms of the disease continued to cause Dodie pain and sleepless nights. However, she took positive action, firmly believing that the disease that had attacking her body and was attempting to take her life was from Satan. In her own words, “Day by day, I gained hope and encouragement from the precious promises that God revealed to me through His Word. I clung to my Bible and its healing promises. The Word became my life. I read and confessed the Scriptures out loud daily.” She goes on to say, “One day we had a special visitation from the Lord. I believe an Angel actually came to strengthen us.”

Dodie Osteen was 48 years of age when she received her terminal cancer notice from her doctors and was given just a few weeks to live. That was over forty years ago! She’s still alive and in good health today and has outlived her husband, John, who passed away in 1999. Her doctors have put on record that Dodie Osteen is the picture of health. “Her physical examination and blood tests are all normal. She is a busy woman, full of energy and free of any pain. She exercises daily. There is absolutely no hint of disease in her body.”

Dodie is aware that some Christians believe that God sometimes sends sickness. That it is may be His will for them to be sick. She strongly refutes that and believes it’s a deception of Satan. She believes if she had any doubts about it being God’s will for her to be well, she may not have received her healing. “God is not your enemy! He will keep you alive. It is the devil who wants to destroy you. Don’t get bitter or angry at God. Fight the devil. God wants you well.”

She confesses that sometimes it felt as though she was going through a dark tunnel. Yet she still confessed, “I am healed.” She cautions, “If you are believing God for something, watch what comes out of your mouth. Keep on confessing the Word of God and God will honour His Word. Your healing doesn’t just automatically happen. You must fight your sickness with God’s Word and your faith.”

To this day, Dodie Osteen reads and confesses healing scriptures daily. She knows the doctors expected her to die, and that it was her confidence in God’s Word that has been responsible for the long life she still enjoys. She has spent the past forty years since her diagnosis, encouraging others who need healing. “Jesus hasn’t changed,” she proclaims. “He is the same yesterday, today and forever. His healing power is available today for you also.” In 2022, she wants anyone in need of healing, to be able to access the Scriptures she embedded in her heart and which turned her situation around. Even though she’s well into her eighties, she has made recordings available on YouTube, of the Scriptures she used and still uses. You can access the 54-minute version below and there is also an extended version available.